I have witnessed mention of Exterior Ballistics make the eyes of magazine editors and writers roll back in their heads. Lack of interest in this subject is evident within the pages of most shooting magazines and the few items that do appear are often incorrect or old disproved concepts. This technical article attempts to provide basic information any shooter can use to explain why the output from ballistics software may not compare to "real world" results.

In 1881 Krupp of Germany first accurately quantified the air drag influence on bullet travel by test firing large flat-based blunt-nosed bullets. Within a few years Mayevski had devised a mathematical model to forecast the trajectory of a bullet. Mayevski's math was too complicated for practical field use by military artillery units. To solve this problem Ingalls published his famous tables and added a factor he called the Ballistic Coefficient (B.C.).

Ingalls defined the B.C. so it represented a bullet's ability to overcome air resistance in flight compared to a standard reference projectile, which he defined as 1 inch in diameter and weighing 1 pound. In those days military projectiles were of similar shape. All projectiles had a flat base and there were only slight variations of the nose ogive. B.C.'s were therefore primarily used to calculate trajectories for differing calibers in use at the time.

The work of Ingalls & Mayevski has been refined many times but is still the foundation of small arms exterior ballistics as used by the shooting sports industry, including a reliance on B.C.'s still based on the Krupp projectile, which was first introduced in 1874.

By the middle of this century rifle bullets had become more aerodynamic and there were better ways to measure velocity. After WWII the U.S. Army's Ballistic Research Lab (BRL) conducted experiments in Aberdeen, MD to measure the drag on bullets caused by air resistance. They discovered air drag increases substantially more just above the speed of sound then previously understood and a bullet's shape significantly affects the amount of drag at different velocities.

In 1965 Winchester-Western published bullet drag ("G") functions for standard reference projectiles of different shapes including one to replace the original Krupp projectile as used by Ingalls designated "G1". The refined G1 standard projectile was still flat based with a 2 caliber ogive but its length was extended to 3.28 calibers with a body nearly 2 calibers long to more closely match the proportions of modern artillery rounds.

The defense industry immediately began using "G" drag functions that most closely matched a bullet's shape so the definition of a ballistic coefficient's standard reference projectile became "1 inch in diameter, weighing 1 pound, OF THE SAME SHAPE".

Even though the BRL had demonstrated modern boat tail bullets do not parallel the flight of either the original Ingalls tables or the refined "G1" function, and although "G" functions for other bullet shapes were available; the civilian shooting sports industry simply adopted the "G1" drag function for all bullets and "G1" is still the basis of most B.C. calculations and published trajectories to this day.

The following plot from RSI's Shooting Lab shows the air drag (coefficient of drag) of several standard bullet shapes and a 30 caliber VLD bullet (white line) from 100 to 4,000 fps. You can see there is great difference between bullet shapes. Note the white line most closely parallels the red "G7" line which indeed is a standard reference projectile of roughly the same shape and is the "G" function that should be used for accurate long range trajectory modeling.

The B.C. of a standard projectile is always 1.00. This VLD bullet has a published "G1" B.C. of .689. You don't need to be a physicist to realize there is something wrong with the number. If the standard projectile is 1 inch in dia., weighs one pound with a B.C. of 1.00, how can a 30 caliber bullet weighing only 220 grains and less then 1/3 the diameter retain nearly 70% of the standard projectile's velocity? It cannot, and indeed a properly calculated B.C. using a 1 pound 1 inch dia. standard bullet OF THE SAME SHAPE is only .344. This is why trajectories calculated for boat tail and VLD bullets using a G1 based B.C. usually shows less drop at long ranges then experienced in the real world. 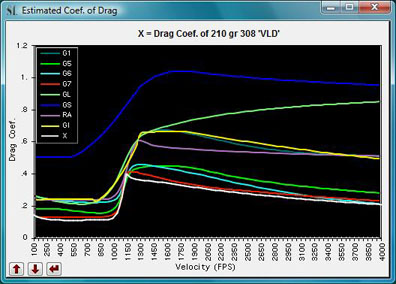 The firearms industry has developed myriad ways to compensate for this problem and still use a standard G1 B.C. for bullet comparisons. Most bullet manufacturers properly measure velocity erosion then publish a B.C. using an "average" of the calculated G1 based B.C.'s for "normal" velocities. This means unless the bullet happens to have the same shape as the G1 standard reference projectile and therefore the same air drag, only at the so-called "normal" or average velocity is the B.C. calculation is correct and the trajectory generated cannot be accurate at long ranges because it will be based on the flight characteristics of a G1 shaped projectile!

Some ballistic programs adjust the B.C. for velocities above the speed of sound, others use several B.C.'s at different velocities in an effort to correct their models. This later approach (as used by Sierra) can produce good results but it is certainly not "elegant math" and has limitations. They are effectively altering the shape of the G1 drag curve by changing the B.C. value at different velocities. Multiple B.C. sets are regularly adjusted so the generated trajectories better correspond to "real world" results, but if the bullet is not included in their data base there may be no way to get accurate output. And, if the bullet is not used by competitive shooters and has not been "traced" at a modern radar range facility, the trajectory output using this method may simply be someone's "best guess".

While these approaches mitigate some of the problem, and Sierra certainly deserves credit for recognizing the problem, B.C.'s based on a single drag function cannot be correct at all velocities for all bullets. Also, the change to air drag as a function of velocity does not happen abruptly. Drag change is continuous with only small variation immediately above or below any point along a trajectory. Methods that change B.C.'s at various velocity ranges often produce "discontinuities" where drag values are changed abruptly. The resulting trajectory may be correct at ranges used in competitive events (because B.C. sets ensure results) but points along the trajectory often does not correspond to the "Real World". For hunters who require reasonable accuracy through all ranges and do not shoot competitive bullets or a brand of bullets included in the data base, this problem poses serious problems.

Today most military munitions are guided in real time or "smart bombs" and there is little defense industry interest in further refinement of small arms exterior ballistics. Even the ballistics research group (BRL) at Aberdeen was closed. But the final methods developed at the BRL were capable of predicting small arms trajectories to within a few inches at 1000 or more yards...FOR ANY PROJECTILE. It can be argued exterior ballistic science had developed to a point where unpredictable environmental factors such as wind eddies and temperature variations cause far greater error at long ranges then the mathematics. Unfortunately the shooting sports industry has failed to adopt the newer methods developed with our tax dollars; the same small arms method still used by the defense industry, called the "Point Mass" and "Modified Point Mass" methods.

Shooting software is available that employs the "Point Mass" method developed at the BRL, with drag functions for most common bullet shapes. Results are superior to traditional "G1 fits everything" thinking, but shooters must learn B.C.'s are different for each "G" drag function. This is a scary proposition for bullet companies who understand many shooters pick bullets based on big B.C.'s. For example, A VLD bullet with a G1 based B.C. of .690 will have a properly calculated G7 B.C. of only .344, even though it is a more aerodynamic shape with less drag. I can sympathize with the bullet companies. Can you imagine trying to explain this to someone who thinks he can make a rifle shoot like a laser, and big B.C.'s are the key? We call these shooters "the laser beam crowd".

True modern ballistics (as defined by the BRL, not Pejsa) uses the coefficient of drag (C.D.) and speed of sound rather than traditional Ingalls/Mayevski/Sciacci s, t, a & i functions. The area of physics involved is sometimes called "aero ballistics". This method is closely aligned with aerodynamics, avoids velocity discontinuities and when combined with a proper drag function is far more accurate to distances beyond 1000 yards. A by-product of modern ballistics is that the C.D. can be estimated from projectile dimensions and used to define custom drag function for unusual bullet shapes.

The Coefficient of Drag (C.D.) for a bullet is an aerodynamic factor that relates air drag to air density, cross-sectional area, velocity and mass. One way to view C.D. is as the "generic indicator" of drag for any bullet of the same shape. Sectional Density (weight multiplied by its frontal area) can then be used to relate the drag coefficient to different bullet sizes.

You can see from the formula that a 1 inch diameter, 1 pound bullet (7,000 gr.) would produce a sectional density of 1. Indeed the standard projectile for all drag functions always weighs 1 pound with a 1 inch diameter.

Another term occasionally found in load manuals is the bullet's "Form Factor". The form factor is simply the C.D. of a bullet divided by the C.D. of a pre-defined drag function's standard reference projectile.

Ballistic Coefficients are then the ratio of velocity retardation due to air drag (or C.D.) for a particular bullet to that of its larger 'G' Model standard reference projectile. To relate the size of the bullet to that of the standard projectile we simply divide the bullet's sectional density by its form factor.

From these short formulae it is evident that a bullet with the same shape as any standard bullet, weighing 1 lb. and 1 inch in diameter will always have a B.C. of 1.000. If the bullet is the same shape, but smaller, it will have an identical C.D., with a form factor of 1.000 and a B.C. equal to its sectional density. You often see articles in magazines declaring the B.C. is simply the Sectional Density divided by Form Factor. They rarely explain a form factor requires accurate C.D. measurements for the bullet and also a standard reference projectile OF THE SAME SHAPE. Indeed if it were that easy to calculate B.C.'s all software would have the ability to calculate B.C.'s for bullets, but few products can..

FOR BEST ACCURACY, CALCULATE YOUR OWN COEFFICIENTS!

Accurate B.C.'s are crucial to getting good data from your exterior ballistics software. A good ballistic program should be able to use two velocities and the distance between them to calculate an exact ballistic coefficient for any of the common drag models. This method of calculating a B.C. is preferred and can be used to duplicate published velocity tables for a bullet when the coefficient is unknown or to more accurately model trajectories from your own firearm. A lot has changed in exterior ballistics since the 1870's. If your software does not allow you to select various drag functions, chances are it does not employ the latest modeling techniques and cannot calculate B.C.'s or generate an accurate long range trajectory for all bullets.