Most reloaders understand that the wrong amount or type of powder will not produce accurate results no matter how much care has been taken to make each round. Powders certainly are not the same. Some purists make sure no rock is left unturned while searching for the optimum load and will test every powder that can be safely fired in a particular caliber. This can be costly and time consuming.so here is an old technique that will help identify powders worthy of testing.

Powders with similar burn rates (quickness) as listed in a reloading manual often will not deliver similar results. There is a simple reason for this. Burn rate is only one powder characteristic and may not be the primary factor which contributes to accuracy in a particular caliber. Composition and granule shape also affects the powder's performance and can vary between powders of similar burn rates. The burn rate of a powder is controlled by its base composition, granule size, granule shape and often a coating on the granules. These design features also change the density of powder so that for a given weight there is more or less gas energy produced for a given volume that the powder occupies.

Ballisticians have long recognized that the volume of powder in a cartridge effects the accuracy of a load. A powder charge that completely fills the space under the bullet is often more accurate. It is theorized that this helps promote more consistent ignition and rise in pressure behind the bullet, more consistent velocities and therefore greater accuracy. Indeed this can be seen with instrumentation that captures the pressure curve.

The percent of the available powder space under the bullet filled by the powder is called the "load density". As the load density is reduced (powder doesn't fill case), the point of peak pressure moves toward the muzzle and velocity falls off. Low load density can cause another problem. With a partially filled case the powder charge can shift to change ignition and the shape of the pressure curve. Increasing the load density moves the point of peak pressure backward toward the chamber and increases velocity. Since the powder cannot shift within the cartridge, ignition and pressure is more uniform, resulting in more consistent velocities and better accuracy.

Also, for most good loads the powder is burned a few inches beyond the point of peak pressure, but if the firearm has a short barrel and low load density, the peak pressure may move further toward the muzzle resulting in excessive "muzzle flash". Excessive muzzle flash happens when unburned powder ignites at the muzzle, causing turbulence behind the bullet with a detrimental effect on accuracy.

There is often a direct relationship between the burn rate (quickness of the powder) and the space a safe powder charge will fill. Powders can be made to burn quicker by reducing the granule size, which increases its density so a given charge weight takes up less space. Switching to a quicker powder may not resolve a muzzle flash problem if the powder has a high density and doesn't fill the case. Instead, filling the case completely with a lower density, but slower powder (as listed in a load table), may hold the point of peak pressure nearer the chamber for a complete burn, less muzzle flash and better accuracy. This is why some reloaders prefer slight compression loads.

Reloaders interested in accuracy have loaded cartridges originally designed for black powder with smokeless powder and everything from cereal to cardboard wads in an effort to fill the excess space. The safety of this practice is questionable and should NEVER be attempted without first consulting a reliable load reference, but those who use fillers swear by the results. This practice is further testament to the validity of load density theory.

CALCULATING YOUR OWN LOAD DENSITIES

If you do not own software that will calculate load densities there is a manual method that will work. First it is necessary to determine the powder capacity of the cartridge. To do this, file a small notch inside the mouth of a fired but not decapped case so it extends from the rim of the case to a point just beneath the bullet's base when it is seated. Weigh the case and bullet. Fill the case with water and carefully seat the bullet while displacing water out the notch filed in the mouth. Weigh the water filled case and bullet again. The difference in weights is the powder capacity of the cartridge in grains of water.

Most powder companies will admit that the bulk density of production lots differ by as much as ±10%. You should consider this limitation when comparing load densities. Powders that produce load densities within 10% of each other may provide similar results and should not be eliminated from consideration. All rules are made to be broken. The theory of load density related to accuracy is not entirely foolproof, particularly when applied to certain cartridges and/or free bored chambers. Any safe charge producing a load density of 80% or more may be worth testing if powders with higher densities do not produce the desired result.

The following output from our software demonstrates a typical load density analysis. Powders commonly used for this heavy bullet in a 30-06 are those which also produce that best load density and the powders at the bottom of the ranking are not even listed in most load manuals for this bullet. 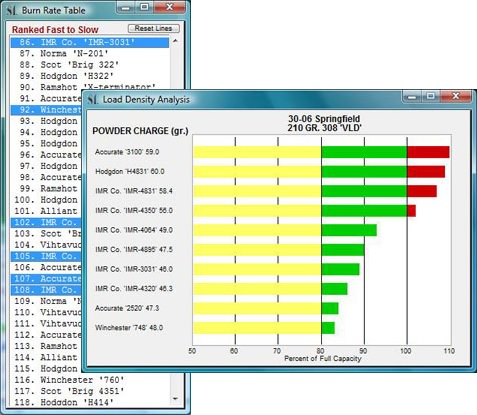 What ever powder you ultimately select will require further load refinement to achieve an optimum charge. See our Reloading Tips page.