PressureTrace II ™ is a single channel high-speed physical event data acquisition system that captures changes to pressure inside your rifle chamber in real time. The software displays a high resolution rifle chamber pressure curve on your computer after each shot so you can compare the total energy delivered by a load, the rise time to peak pressure, affects of bore fouling, seating depth and barrel timing and develop optimum loads or isolate the reasons a load does not work well.

PressureTrace obsoletes interior ballistics software that at best, crudely predicts pressures. You will quickly learn to recognize the classic "look" of loads that work best, how neck tension and seating depth affect the shape of the pressure curve and even how throat condition and barrel fouling alter what happens inside a cartridge as it is fired. There is simply no way to "estimate" these factors with mathematical algorithms in software.

At roughly the cost of a good scope, PressureTrace should be the next tool serious reloaders will want on their shooting bench.

What Makes It Work
The PressureTrace rifle chamber pressure testing hardware and software system consists of a microprocessor control module, cables, PC software and a strain gage. The control module is connected between a strain gage (glued to your barrel) and a PC (not included) via bluetooth wireless connection. The PC runs software which emulates an oscilloscope and provides analytical tools. If your computer does not have bluetooth, inexpensive dongles are available that will add a bluetooth radio to any USB port.

A strain gage is simply a small piece of polymer material with a fine conductive grid on its surface. As steel around the barrel expands the gage is stretched and current flow through the grid is altered. The PressureTrace module samples these current fluctuations (1 sample per 10 micro seconds/350 per shot), stores it in a memory buffer, then automatically downloads the raw data to the PC via a wireless connection where it is analyzed and plotted. Up to 10 shots can be overlayed and compared on screen at a time.

Watch a nicely done Youtube Video by a customer. 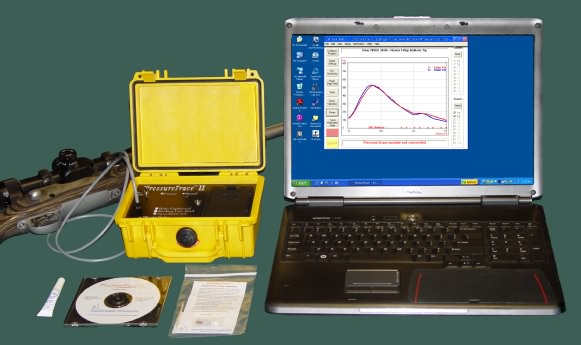 Microprocessor Controlled
The PressureTrace module contains a microprocessor which reduces or removes noise and senses changes to current flow caused by barrel heating or other factors that would adversely affect the accuracy of measurements. The system has extremely high reliability and is easy to use.

Once a firearm's dimensions and the "gage factor" (provided with each strain gage) have been entered into the PC software, just plug the module into a firearm, select the firearm from a pop up menu, click "shoot" and it is ready to capture pressure curves. After every shot a trace will overlay on the PC screen to a total of 10. No need to adjust "pots" for different guns, temperature changes, etc. This is all handled transparently by the module.

PressureTrace will generate PSI estimates without calibrating the system to a factory load!
Using factory ammo or a load reference with known pressure to verify results is always recommended but we recognize each chamber will produce different pressures and wildcatters may have nothing for comparison. PressureTrace uses both thick and thin wall open vessel algorithms to provide reasonably accurate pressure estimates from barrel, chamber and brass dimensions. Unlike other products PressureTrace does not require a large correction "fudge" factor for pressure held by the brass but the system can still be calibrated to match other pressure systems. For safety, NEVER exceed the loads in a reputable load manual.

Note: If a barrel is not cylindrical at the chamber (where the gage is glued) the system MUST be calibrated against a load of known pressure. This is particularly true of double barrel shotguns with a strong flare near the locking mechanism, octagonal barrels, etc.

No permanent modification to your guns is required.
Strain gage kits include special glue, cleaning swabs, teflon strips, instructions and gage(s) already soldered to a connection receptacle and plastic carrier. Unlike other systems PressureTrace does not require a ground connection to the firearm so there is no need to ruin the barrel's finish. Gages can be removed with acetone leaving no indication the system was ever installed.

The gages and connectors are extremely small ... barely noticeable. They can remain on a barrel without getting in the way. The gages are even small enough to fit Contenders or any handgun with an exposed barrel area. PressureTrace can be used to stay within factory pressure limits to avoid stretching single shot handgun frames. 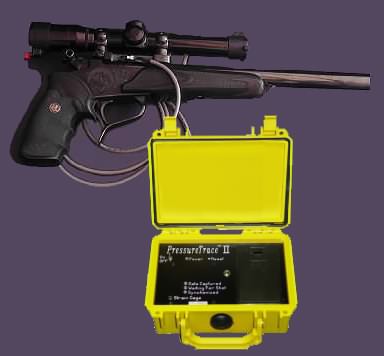 PressureTrace captures more data points then other systems and plots them on the same scale so you can see the minutest differences in loads. Other systems have low resolution, their images are tiny and even "smoothed" to eliminate these differences. With PressureTrace you see exactly what you get so even the slightest variations can be recognized. This makes PressureTrace a superior diagnostic tool for accuracy load development.

This sample trace shows 5 shots where the powder weight was increased by 1/2 grain in an attempt to find the most efficient powder charge. It is a classic example of what happens when you reach a point where more powder does not result in significantly more velocity. "T4" was the most efficient powder charge (50.5 gr) and indeed produced the most consistent pressure curve, but at a conservative pressure of only 44,400 PSI! This was no doubt at least in part due to the lower bearing surface and bore friction of a Sierra boat tail bullet. Nosler Ballistic Tips (with shorter tail and larger bearing surface) produced pressures over 50,000 PSI and 2900 FPS with the same amount of Varget. Loads with either bullet shot under .5 M.O. A.

PSI (Peak Pounds per Square Inch)
Peak PSI is calculated from the strain information collected by the PressureTrace module along with the chamber dimensions entered in the software.

Area (Area Under the Curve)
The area under the curve is calculated using the velocity information you enter for each shot, the effective barrel length and the pressure curve.  Note the marks on each trace. This is the bullet exit points for each trace. The area under the curve from detonation to when the bullet exits the muzzle is an indication of the actual energy produced by the load.

Rise (Rise Time)
The rise time is calculated as the time (in microseconds) it takes for the pressure to rise from 25% of the peak value to 75% of the peak value.  This can be taken as an indication of the "speed" to peak pressure. Efficient loads will normally have a faster rise time. It is also preferable to have a faster rise time because this helps ensure complete powder burn and reduced muzzle blast.

Eff% (Efficiency)
This calculation can be used to compare loads.

It is based on a well know fact that for loads that produce similar velocity, the load with the largest area under the curve and the lowest peak pressure is the most efficient.  Efficiency is a calculated as follows:

The load with the highest efficiency is then indexed as 100% and all other loads will have a smaller value.

Ave (Average)
Shows the average values for Peak Pressure, Area Under the Curve and Rise Time.

SD (Standard Deviation)
Standard deviation is a measure of how widely values are dispersed from the average value (the mean).  It is the square root of (the difference between the mean of the squares of the numbers and the square of the mean.

95%Prob (95% Probability)
The "95% Probability" is an additional factor you can use to compare your loads when the number of test shots are not sufficient to be statistically reliable (fewer than 10 shots). It means at least 95% of time the load should produce a value plus or minus this amount. Unlike standard deviation, the "95% Probability" number is weighted for the number of shots in the sample to determine “bounds on the mean.” For the statisticians who are interested, the "95% Error" is calculated using the two-sided Student’s T-test.

Hi
Highest value in the group.

Lo
Lowest value in the group.

ES (Extreme Spread)
The difference between the Hi and Lo values.

Additional Notes
Additional information about the load and shooting conditions can be added to a file or for printed reports.

Strain gages have been used in industrial instrumentation for several decades and is fully developed, proven technology. Denton Bramwell, (physicist and statistician with a great deal of test instrumentation experience) recently compared the results of various pressure measurement methods for an article in Varmint Hunter magazine. He used a standard measure of how likely a system will give correct answers called "Sigma E" for comparison. (Smaller Sigma E values are best.) Here's a link to a video he shot at the local range.

Bramwell's conclusions are as follows:

"The PressureTrace system allows the careful home experimenter to produce pressure data which rivals or exceeds the repeatability of other systems, including systems used to generate commercially published data. The careful attention to circuit board layout and design undoubtedly contributes to the repeatability of the (PressureTrace) system. Careful design keeps unwanted signals out of the system, reducing electrical noise, and statistical error." Technical articles by Bramwell.

**From the Lyman manual, pg 91. If instrumentation error caused by heating is removed from the data, the Sigma E value for the Lyman data is 445. In small samples the difference between 445 and 667 are virtually indistinguishable.

A PC running Windows XP or newer with Bluetooth. If the PC is not equipped with BlueTooth, an inexpensive BlueTooth dongle can be added to a USB port ($10).

A chronograph is not required but some calculations and features require muzzle velocities.

Earn discounts by ordering more than one RSI product.

If you still have questions check our PressureTrace support page