This product has been discontinued and will be replaced. No date certain has been established.

Experienced shooters have long understood consistent neck tension is critical to achieving extreme accuracy. Mechanical and electronic devices to measure neck tension have been offered to shooters but they were incapable of measuring the proper forces. Even worse, the numbers these devices captured were not calibrated to a standard measure and were not linear (a reading of 100 was not twice the force of 50). LoadForce was the first calibrated high speed measurement device that would capture the peak neck tension as a bullet was seated.

Until LoadForce, measuring recoil required expensive lab equipment and typical stationery test method employed by most labs produce measurements that are not reflective of the actual recoil "felt" by a shooter. The LoadForce-250™ captured the actual peak force imparted to a shooter's shoulder and when connected to a PC will capture the entire recoil force curve. Unfortunately the product was primarily purchased by butt pad and muzzle brake companies to measure recoil. Only a few were purchased for its intended primary purpose. LoadForce was not an ideal recoil meter and most of the firmware investment was to make it work on either a conventional or arbor press. A reincarnation will likely be two different products. 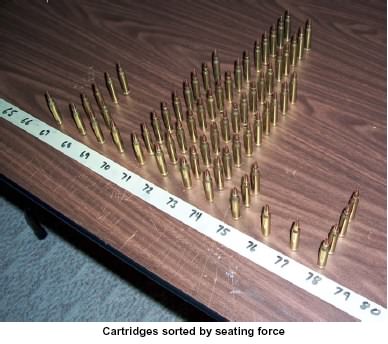 Bullets were started in a conventional way then "finish seated" using the meter. The force required to push the bullet into the neck of each case was automatically displayed on the meter for each round.

The loader then simply sorted rounds as they were loaded according to neck tension. Loads of similar neck tension always produced more consistent pressures, lower velocity deviation and therefore smaller groups. The meter also helped detect neck rings, rough or dirty necks and other problems that would reduce load performance.

For high volume reloaders it was not necessary to remanufacture loads with higher or lower neck tension. Just box them up and shoot! Each box just "printed" in a slightly different location but was be far more consistent then if they contained rounds of "mixed" neck tension.

We have all seen shooters take a piece of brass that shot a "flyer" and throw it across the range so they never use it again. Often some expletives accompany that gesture. Brass does not necessarily "work harden" uniformly ...especially if it has been used to shoot different loads. And, simply keeping track of how many times a piece of brass has been fired will not ensure the neck tensile properties of a lot of brass remains uniform.

There is a good probability the discarded brass had work hardened differently or due to how it had been cleaned, developed roughness on the inside neck surface. Even chamfering of the mouth can affect neck tension. If the discarded brass were saved, eventually there may be other pieces that produce similar neck tension so it could be used.

This is why good brass often shoots best when new. Now shooters don't have to discard brass and all the time required to sort, turn necks and "uniform" each piece. Providing consistent neck tension can be maintained, brass can often be used until the necks start cracking. Even then, there is always the option of annealing the brass to extend its life for another cycle. 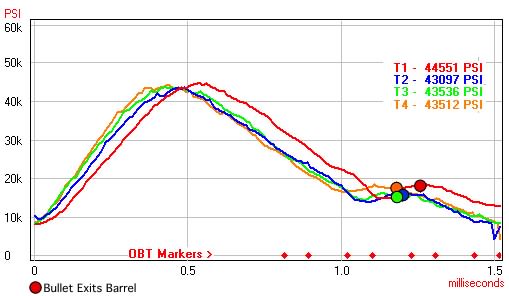 Varying neck tension changes the shape of the pressure curve and when the bullet exits the muzzle. The above pressure curves captured with our PressureTrace system contains 4 shots of a light target load. "Fouling" rounds were shot from a cold clean barrel until pressures stabilized so the affects of fouling were not represented in the traces.

This load is normally crimped heavily to achieve acceptable velocities but for this test, each was loaded with reasonable but different neck tension. As the neck tension increases the rise time to peak pressure shortens and the bullet exits sooner. Note the "Optimum Barrel Timing" markers calculated for the rifle by our PressureTrace software. Load T1 exits the barrel at an undesirable time. Indeed, the 4 shot group looked similar to this analysis with shot 1 being a flyer. For this particular load neck tension should be held to at least 90 pounds of force.

Why Other Systems Did Not Work Well 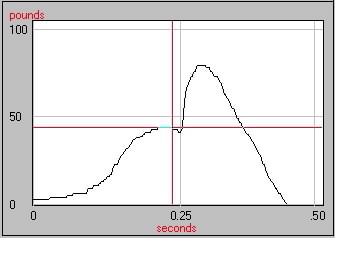 We experimented with other systems and determined they all had serious limitations. Both the mechanical and electronic strain gage systems were not calibrated to a standard measure. This alone would not be a major problem, but electronic systems were also not linear. A reading of 100 was not twice the force that produced a reading of 50.

To make things worse, the designs relied on bending metal which would fatigue so readings were not consistent over time. This made it nearly impossible to duplicate load development as the metal parts fatigued.

We were also concerned that readings from other systems often did not correlate closely with group size. After years of research we discovered the portion of the force curve that most closely correlates to actual neck tension; thereby affecting the pressure curve.

When a bullet is seated, forces first build until static friction is overcome then the bullet starts to move (not included in above graph). As it progresses further into the neck, dynamic friction increases as the contact area between the case neck and the bullet increases.  When using a standard reloading press, dynamic forces increase until the press reaches the end of its stroke, then force drops off. With an arbor press things are more complex. The in-line die seating stem bottoms out and adds force rapidly as pictured above.

LoadForce captured only forces (in pounds) that corresponded to actual neck tension. The meter disregarded initial static friction forces and the forces created when an in-line die seating stem bottoms.

Note: LoadForce was calibrated to 250 pounds. Two hundred pounds of peak recoil force is well beyond the range most shooters find uncomfortable. It is unlikely a production rifle will produce recoil that high. For example, a hot 30-06 heavy bullet load can produce 175 pounds of force if shot from a light rifle with hard butt plate...and it wll hurt. The shooter's build, powder burn rate, rifle weight and stock shape will all affect peak recoil forces. For special applications sensors can be provided that will capture forces to 500 pounds calibrated to an accuracy resolution of 2 pounds. 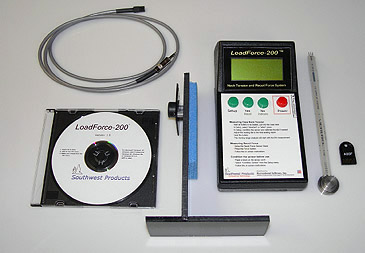 List of items that were included with each LoadForce-250™ 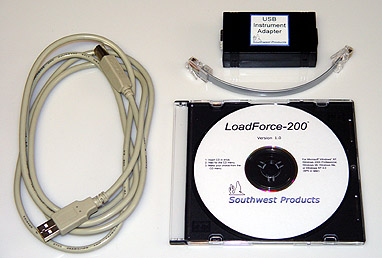